“Reactive” Pap Results – The End Of An Era

For many years, Incyte Diagnostics has reported “reactive cytologic changes” or “benign cellular changes” for cells in a Pap smear having enlarged, non-dysplastic nuclei. This Pap finding is nonspecific and is usually secondary to an inflammatory or reparative process.

In the days before ASCUS reporting and HPV testing, “reactive” findings identified a category of Pap finding that was not entirely normal in its appearance, and which did not have dysplastic cells. This non-specific nuclear enlargement finding was termed “Class II” in the old Papanicolaou Class system, and was usually followed by repeat Pap test to be sure that the changes resolved. This diagnosis was sometimes a source of confusion for both patients and their caregivers because the finding was neither normal nor abnormal, and was not enough to warrant treatment. Also, there were (and still are) no consensus guidelines for the clinical management of patients with this Pap finding.

A wise old gynecologist once told me how he explained these results to his patients: “I like to use the old Papanicolaou Class system, because numbers are understandable to the patient. I tell them that, on a scale of 1 to 5, with 1 being normal and 5 being cancer -- and with 3 being the point where I initiate action -- their result was a 2. I would then reassure them that Class 2 findings were nothing to worry about and that these findings usually went away on their own. I would then tell them that – just to be sure – we would repeat her Pap in 6 months instead of a year to monitor the finding."

Since 1989, there have been several significant developments in the field of cytology that have rendered the category of reactive changes to clinical obsolescence.

One such development was the coining of the terms “Atypical Squamous Cells of Undetermined Significance (ASCUS)” by a large group of experts who met in Bethesda, Maryland, first in 1988, then again in an update conference in 2001. The recommendations of the first conference became “The Bethesda System For Standardization Of Reporting Of Cervical Cytology”.

Bethesda 2001 separated findings of ASCUS into two categories, either “of undetermined significance” (ASC-US) or “cannot exclude HSIL” (ASC-H). The newer term ASC-H represented approximately 5-10% of overall ASC cases and has shown to have significant positive predictive value for the findings that fall between ASC-US and HSIL, such that the recommendation for ASC-H became immediate colposcopy, irrespective of hrHPV results.

Also in 2001, the previous category heading of “ASCUS, favor reactive” was combined into the category formerly termed “benign cellular changes (BCC)” along with the category “within normal limits”, together forming a single category called “negative for intraepithelial lesion or malignancy” (NILM). The BCC category was termed optional to report as a separate line finding in the cytology report. 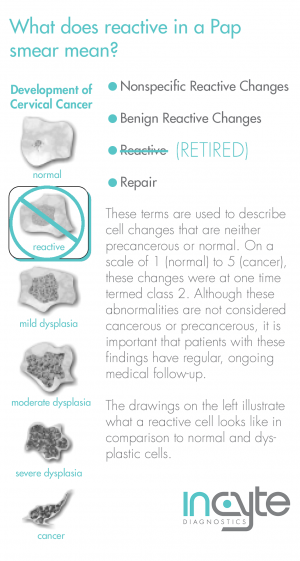 One of the great accomplishments of the Bethesda conferences was to eliminate the terms “atypical” and “atypia” from the terminology used to describe reactive changes, reserving these terms only for findings where there is concern for the possibility of a neoplastic or preneoplastic lesion.

Another development has been the rapid advancements in HPV testing. The extensive ASCUS and LSIL Long Term Follow-Up Study (ALTS) published in 1995 by the National Institutes of Health validated reflex HPV testing as clinically effective, cost-effective and the preferred method for following women with a diagnosis of ASCUS. It is endorsed by the ASCCP (American Society of Colposcopy and Cervical Pathology), where reflex HPV testing plays a key role in practice algorithms for patients with abnormalities discovered on Pap smear.

In summary, in a laboratory, reactive changes in a Pap are identified, confirmed to be nonneoplastic, then reported as a ‘Negative’ finding, with clear distinction of the finding from ASCUS or LSIL, without the use of HPV tests.

The goal of Incyte Diagnostics is to communicate cytologic interpretations to the clinician in a clear and relevant fashion, providing clear guidance for clinical management. Thus, the long-reported “Reactive” finding will now be reported as “Negative”, and our patient education rack card (see Figure 1) has been retired. The card was a very useful patient education tool for many offices for many years, but now, in a new era, it has been “taken off the rack”.