Benign Endometrial Cells in Women Over 40 Years of Age: What is the Best Practice? 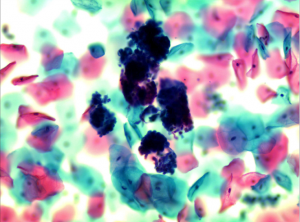 Why do laboratories utilize the reporting category “Endometrial Cells Present in a Woman over 40 Years of Age”?

The Bethesda System for Reporting Cervical Cytology, in its 2001 workshop, retained the category of “Exfoliated Endometrial Cells in a Woman Greater Than 40 Years of Age”. The authors of Bethesda 2001, however do not recommend reporting this as an “epithelial abnormality,” a departure from the statement in the 1991 edition of the book.

Why was the cut-off age determined to be 40 years since not all women over 40 are post-menopausal?

The Bethesda 2001 recommendation to report the presence of benign endometrial cells in Pap in all patients over the age of 40 years is based on two factors: 1) the literature evidence of lack of significant endometrial pathology in patients LESS than 40 years old and 2) lack of reliability of clinical information regarding menopausal status and clinical symptoms available to the pathologist at the time of Pap interpretation. It was decided that reporting of benign endometrial cells in Pap from all patient’s over the age of 40 would ensure uniformity of reporting. Additional specific educational comments accompanying the reporting of the endometrial cells may impact the follow up and frequency of endometrial sampling.

What comment does Incyte utilize when reporting benign endometrial cells in Pap from women over the age of 40?

“Reporting of the presence of endometrial cells in a pap test in a patient over the age of 40 is required by The Bethesda System for Reporting of Cervical Cytology specimens. The significance of this finding however is controversial. The detection of significant pathology in asymptomatic patients in follow-up of this Pap finding is very low. Please correlate clinically.”

How is it determined whether endometrial cells are “in-cycle” or “out-of-cycle”?

Correlation of the Pap finding is based upon the patient’s last menstrual period (LMP). In premenopausal women, exfoliated endometrial cells during the patient’s proliferative phase of her menstrual cycle or during the menstrual phase are commonly seen, and are interpreted as “in-cycle” normal findings. Such cells are the consequence of normal increased shedding of the endometrial lining during these phases. If the cells are present beyond two weeks from the LMP, they are interpreted as “out-of-cycle.”

In follow-up biopsies of women over 40 with benign endometrial cells on Pap, what are the most common biopsy findings?

Most follow-up biopsies in this setting are benign, and the most common cause of the presence of exfoliated benign endometrial cells in a Papanicolaou collection from a woman over 40 years of age is hormone replacement therapy (HRT). For women who are not on HRT, the most common pathologic condition encountered in follow-up biopsy is endometrial polyp, followed by leiomyoma and atrophy. In a small number of women, endometrial hyperplasia and carcinoma are identified, conditions often associated with abnormal bleeding (Table 1).

Recent studies suggest that most women with endometrial carcinoma present with abnormal uterine bleeding but some studies have reported the presence of endometrial cells as the only abnormal finding (i.e. the patient is asymptomatic) in a small proportion of asymptomatic women in whom endometrial adenocarcinoma was subsequently detected.

What is the best practice for follow up in women over 40 who are found to have endometrial cells on routine Pap?

The follow up algorithm should consider if the patient is symptomatic (abnormal vaginal bleeding) or asymptomatic and the patient’s menstrual status. In asymptomatic women, the incidence of endometrial abnormality is very low and literature evidence supports conservative follow up.